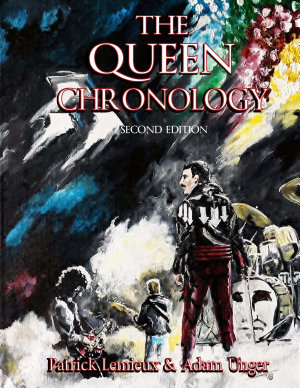 REVISED & EXPANDED 2ND EDITION The Queen Chronology is a comprehensive account of the studio and live recording and release history of Freddie Mercury, Brian May, John Deacon and Roger Taylor, who joined forces in 1971 as the classic line-up of the rock band Queen. Years of extensive research have gone into the creation of the Chronology, which covers the very beginnings of band members' careers, their earliest songwriting efforts and recording sessions, through the recording and releasing of Queen's 15 original studio albums with their classic line-up, to the present-day solo careers of Brian May and Roger Taylor. All of this information is presented date by date in chronological order, with detailed descriptions of each song version, including those both released and known to be unreleased. Every Queen and solo album, single, non-album track, edit, remix and extended version is examined, as are known demos or outtakes, pre-Queen recordings and guest appearances.

Authors: Disha Experts
Categories:
The thouroughly Revised & Updated 2nd Edition of the book '2200+ MCQs with Explanatory Notes For HISTORY' has been divided into 4 chapters which have been furth

The History of Spain, 2nd Edition

Authors: Peter Pierson
Categories: History
Updated from the original 1999 publication, The History of Spain examines Spain's long and fascinating history, from the earliest cave dwellers of Altamira to t

The History of the Philippines, 2nd Edition

Authors: Anne B. Rodrick
Categories: History
This addition to The Greenwood Histories of the Modern Nations provides an updated, clear, and concise history of Great Britain that will be of value to undergr

Authors: Larry Wayne Richards
Categories: Study Aids
University of Toronto: The Campus Guide, second edition, portrays the dramatic growth and development of Canada's largest university while it showcases some of