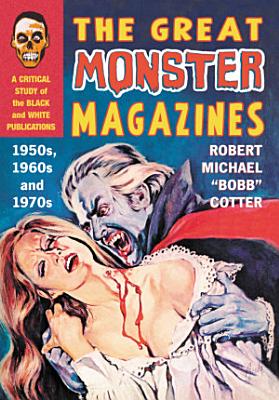 Honorable Mention, Rondo Hatton Award “Lengthy introduction…a nice job…hitting on some of the very insignificant magazines”—Mani.com “A vein worth mining”—Scarlet “In depth…both an affectionate look back, and a scholarly study, of a period in horror history”—Scary Monsters Magazine “Includes all of the Marvel B&W mags”—Famousmonsters of filmland.com.

This is a critical overview of monster magazines from the 1950s through the 1970s. “Monster magazine” is a blanket term to describe both magazines that focus primarily on popular horror movies and magazines that contain stories featuring monsters, both of which are illustrated in comic book style and printed in black and white. The book describes the rise and fall of these magazines, examining the contributions of Marvel Comics and several other well-known companies, as well as evaluating the effect of the Comics Code Authority on both present and future efforts in the field. It identifies several sub-genres, including monster movies, zombies, vampires, sword-and-sorcery, and pulp-style fiction. The work includes several indexes and technical credits.

Authors: Richard Cummings
Categories: Masks
Instructions for looking like 19 famous monsters, including Dracula, the Phantom of the Opera, Quasimodo, and King Kong.

The Great Book of Movie Monsters

Authors: Jan Stacy
Categories: Horror films
"The great book of movie monsters exposes the private lives of more than 300 of your favorite creatures, each one depicted in all its glory. Discover the truth

Authors: David K. Henkel
Categories: American periodicals
The Essential Guide to American Magazines Here is the only guide on the market to all major categories of general circulation American magazines from 1880 to 19