The Gods Never Left Us 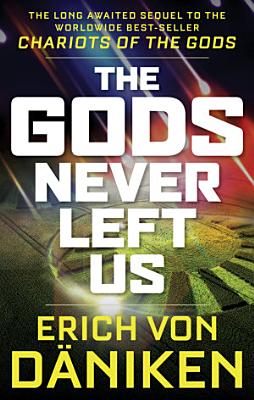 The Long Awaited Sequel to the Worldwide Best-seller Chariots of the Gods When Chariots of the Gods was published 50 years ago, it began a worldwide change in humanity's view of the cosmos. In an era of the military space race, Erich von Däniken boldly proclaimed that Earth had been visited by more advanced beings early in our history. But prescientific man had no concept of space ships, so he called their vehicles "chariots," and those driving the chariots became "gods." Over the next five decades, von Däniken's more than 40 books built an ever-stronger case for Earth being visited by extraterrestrial visitors. And Chariots became an international best seller, with 30 million copies sold in more than two dozen languages. Also during that time, the case for ET visitations millennia ago was being reexamined by contemporary UFO researchers, who found evidence of modern visitations. And von Däniken expanded his perspective to encompass the present. Now, he presents his long-awaited sequel to Chariots of the Gods, proclaiming that the gods never left us with all-new material to show that ancient aliens are still with us. The Gods Never Left Us contends that recent advancements in biotechnology, astrophysics, engineering, and artificial intelligence not only give us a fresh perspective on his ancient astronaut theory but actually validates it. We are--as a race--embarking on the exact same trajectory of our own interplanetary colonization, just as von Däniken suggested Earth itself was colonized. ETs are definitely at work today. And that affects all of us. Why do they do what they do? What could an extraterrestrial species possibly gain from observing us in the same way we look at ants? What have these strangers wanted for the past thousands of years? Can't they leave us alone? And what makes it so difficult for us to acknowledge the existence of these extraterrestrials? That is what this book deals with. "Erich's newest book is a fascination journey from the ancient past into the present with a plethora of scientific evidence and documented research. As always, he ads his own "to the point" take on it all. Readers may also like that his newest work moves in a slightly different direction from his past books. A thoroughly enlightening and enjoyable Read." --Bruce Cunningham, Director, Ancient Mysteries International LLC & Publisher of Advanced Archaeology Review magazine

The Gods Never Left Us

Enoch and the Return of the Gods

Confessions of an Egyptologist

Authors: Erich von Daniken
Categories: BIOGRAPHY & AUTOBIOGRAPHY
Bestselling author Erich von Däniken shares the story of a 16-year-old grave-diver who discovered a mysterious labyrinth of the old kings under one of the pyra

The Gods Were Astronauts

War of the Gods

The Money God, Or, The Empire and the Papacy

Authors: G. Atkins
Categories: Literary Criticism
This book offers an exciting new approach to T.S. Eliot's Four Quartets as it shows why it should be read both closely and in relation to Eliot's other works, n

Knowledge of the Gods

Authors: A. M. Muhammad
Categories: Religion
In the Name of Allah, the Beneficent, the Merciful. We bear witness that Muhammad of 1400 years ago (PBUH) is Allah's last Prophet. Peace! Peace! I am Field Sup

Authors: Rob Chifokoyo
Categories: Biography & Autobiography
This book is full of my own life experiences that have shown me time and time again that Gods hand is upon us even when it may be scary, dark and hopeless. He i