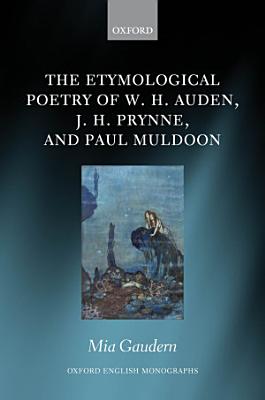 This book defines, analyses, and theorises a late modern 'etymological poetry' that is alive to the past lives of its words, and probes the possible significance of them both explicitly and implicitly. Close readings of poetry and criticism by Auden, Prynne, and Muldoon investigate the implications of their etymological perspectives for the way their language establishes relationships between people, and between people and the world. These twin functions of communication and representation are shown to be central to the critical reception of etymological poetry, which is a category of 'difficult' poetry. However resonant poetic etymologising may be, critics warn that it shows the poet's natural interest in language degenerating into an unhealthy obsession with the dictionary. It is unavoidably pedantic, in the post-Saussurean era, to entertain the idea that a word's history might have any relevance to its current use. As such, etymological poetry elicits the closest of close readings, thus encouraging readers to reflect not only on its own pedantry, obscurity, and virtuosity, but also on how these qualities function in criticism. As well as presenting a new way of reading three very different late modern poet-critics, this book addresses an understudied aspect of the relationship between poetry and criticism. Its findings are situated in the context of literary debates about difficulty and diction, and in larger cultural conversations about the workings of language as a historical event.

The Life of Words