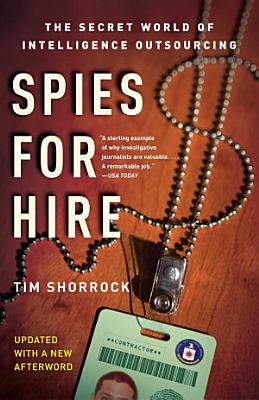 In Spies for Hire, investigative reporter Tim Shorrock lifts the veil off a major story the government doesn't want us to know about -- the massive outsourcing of top secret intelligence activities to private-sector contractors. Running spy networks overseas. Tracking down terrorists in the Middle East. Interrogating enemy prisoners. Analyzing data from spy satellites and intercepted phone calls. All of these are vital intelligence tasks that traditionally have been performed by government officials accountable to Congress and the American people. But that is no longer the case. Starting during the Clinton administration, when intelligence budgets were cut drastically and privatization of government services became national policy, and expanding dramatically in the wake of 9/11, when the CIA and other agencies were frantically looking to hire analysts and linguists, the Intelligence Community has been relying more and more on corporations to perform sensitive tasks heretofore considered to be exclusively the work of federal employees. This outsourcing of intelligence activities is now a $50 billion-a-year business that consumes up to 70 percent of the U.S. intelligence budget. And it's a business that the government has tried hard to keep under wraps. Drawing on interviews with key players in the Intelligence-Industrial Complex, contractors' annual reports and public filings with the government, and on-the-spot reporting from intelligence industry conferences and investor briefings, Spies for Hire provides the first behind-the-scenes look at this new way of spying. Shorrock shows how corporations such as Booz Allen Hamilton, Lockheed Martin, SAIC, CACI International, and IBM have become full partners with the CIA, the National Security Agency, and the Pentagon in their most sensitive foreign and domestic operations. He explores how this partnership has led to wasteful spending and threatens to erode the privacy protections and congressional oversight so important to American democracy. Shorrock exposes the kinds of spy work the private sector is doing, such as interrogating prisoners in Iraq, managing covert operations, and collaborating with the National Security Agency to eavesdrop on Americans' overseas phone calls and e-mails. And he casts light on a "shadow Intelligence Community" made up of former top intelligence officials who are now employed by companies that do this spy work, such as former CIA directors George Tenet and James Woolsey. Shorrock also traces the rise of Michael McConnell from his days as head of the NSA to being a top executive at Booz Allen Hamilton to returning to government as the nation's chief spymaster. From CIA covert actions to NSA eavesdropping, from Abu Ghraib to Guantánamo, from the Pentagon's techno-driven war in Iraq to the coming global battles over information dominance and control of cyberspace, contractors are doing it all. Spies for Hire goes behind today's headlines to highlight how private corporations are aiding the growth of a new and frightening national surveillance state.

Authors: Tim Shorrock
Categories: Political Science
In Spies for Hire, investigative reporter Tim Shorrock lifts the veil off a major story the government doesn't want us to know about -- the massive outsourcing

Authors: Jeremy Scahill
Categories: History
Meet Blackwater USA, the private army that the US government has quietly hired to operate in international war zones and on American soil. Its contacts run from

Authors: Tim Shorrock
Categories: Law
Reveals the formidable organization of intelligence outsourcing that has developed between the U.S. government and private companies since 9/11, in a report tha

Authors: Phillipp O. Amour, Ph.D.
Categories: History
The Middle East is a center of ceaseless global attention. Since 2011, the long awaited and much celebrated Arab Spring uprisings portended a major shift in the

Authors: Barry Meier
Categories: Political Science
A Pulitzer Prize-winning journalist's revelatory look inside the sinister world of private spies. A spy story like no other. Private spies are the invisible for

Under an Ionized Sky

Authors: Elana Freeland
Categories: Nature
It is difficult to believe that our planet has been weaponized before our very eyes, but that is exactly what has happened. First, we were seduced by the conven

Authors: Damien Van Puyvelde
Categories: History
In the 21st century, more than any other time, US agencies have relied on contractors to conduct core intelligence functions. This book charts the swell of inte

Authors: Andrew Friedman
Categories: Architecture
The capital of the U.S. Empire after World War II was not a city. It was an American suburb. In this innovative and timely history, Andrew Friedman chronicles h

Authors: Loch K. Johnson
Categories: Political Science
The Oxford Handbook of National Security Intelligence is a state-of-the-art work on intelligence and national security. Edited by Loch Johnson, one of the world