Socialist Realism in Central and Eastern European Literatures Under Stalin 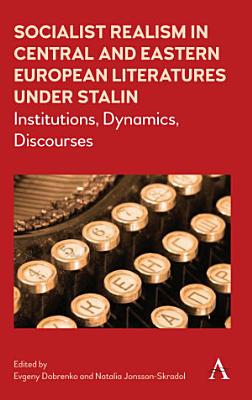 Socialist Realism in Central and Eastern European Literatures' is the first published work to offer a variety of alternative perspectives on the literary and cultural Sovietization of Central and Eastern Europe after World War II and emphasize the dialogic relationship between the ‘centre’ and the ‘satellites’ instead of the traditional top-down approach. The introduction of the Soviet cultural model was not quite the smooth endeavour that it was made to look in retrospect; rather, it was always a work in progress, often born out of a give-andtake with the local authorities, intellectuals and interest groups. Relying on archival resources, the authors examine one of the most controversial attempts at a cultural unification in Europe by providing an overview with a focus on specific case-studies, an analysis of distinct particularities with attention to the patterns of negotiation and adaptation that were being developed in the process.

Socialist Realism in Central and Eastern European Literatures Under Stalin

Authors: Evgeny Dobrenko
Categories: History
Socialist Realism in Central and Eastern European Literatures' is the first published work to offer a variety of alternative perspectives on the literary and cu

The Culture of the Stalin Period

Authors: Hans Gunther
Categories: History
Up to now the culture of the Stalin period has been studied mainly from a political or ideological point of view. In this book renowned specialists from many co

From Internationalism to Postcolonialism

Authors: Rossen Djagalov
Categories: Literary Criticism
Would there have been a Third World without the Second? Perhaps, but it would have looked very different. Although most histories of these geopolitical blocs an

Authors: Amelia M. Glaser
Categories: Literary Criticism
Comintern Aesthetics shows how the cultural and political networks emerging from the Comintern have continued, even after its demise in 1943.

Authors: Susan E. Reid
Categories: History
This fascinating book takes as its premise the notion that material culture can help explain the experience of state socialism as lived by ordinary people in Ea

Cinema, State Socialism and Society in the Soviet Union and Eastern Europe, 1917-1989

Authors: Sanja Bahun
Categories: Social Science
This book presents a comprehensive re-examination of the cinemas of the Soviet Union and Central and Eastern Europe during the communist era. It argues that, si

Socialist Internationalism in the Cold War

Authors: Patryk Babiracki
Categories: History
This volume examines how numerous international transfers, circulations, and exchanges shaped the world of socialism during the Cold War. Over the course of hal

Architecture and Ideology in Eastern Europe During the Stalin Era

Authors: Anders ?Man
Categories: Architecture
Since 1978, Anders Aman has been researching, photographing, and documenting the architectural style known as Socialist Realism. In the midst of the current sta