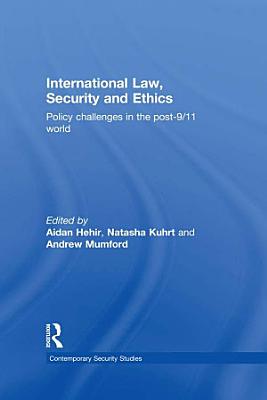 This book examines the different ways in which the laws governing the use of force and the conduct of warfare have become subject to intense scrutiny and contestation since the initiation of the war on terror. Since the end of the Cold War, the nature of security challenges has changed radically and this change has been recognised by the UN, governments and academics around the world. The 911 attacks and the subsequent launch of the 'war on terror' added a new dimension to this debate on the nature and utility of international law due to the demands from some quarters for a change in the laws governing self-defence and humanitarian intervention. This book analyses the nature of these debates and focuses on key issues that have led to the unprecedented contemporary questioning of both the utility and composition of international law on the use of force as well as the practicability of using force, including handling of ‘prisoners’ and ‘security risks’. It also identifies the sources of division and addresses the capacities of security policy and international law to adapt to the changed international environment. This book will of much interest to students of international law, war and conflict studies, and IR and Security Studies in general.

Authors: Aidan Hehir
Categories: History
This book examines the different ways in which the laws governing the use of force and the conduct of warfare have become subject to intense scrutiny and contes

The Oxford Handbook of Peacebuilding, Statebuilding, and Peace Formation

Authors: Barbara von Tigerstrom
Categories: Law
The concept of 'human security' has influenced discourse and practice and has been the subject of vigorous debate. Despite its relevance to central questions of

Authors: Anthony Burke
Categories: Political Science
This book will be the first systematic examination of the role that ethics plays in international security in both theory and practice, and offers the reader a

Cyber Attacks and International Law on the Use of Force

Beyond Security, Ethics and Violence

Authors: Anthony Burke
Categories: Political Science
In a world plagued by war and terror, Beyond Security, Ethics and Violence sounds a warning: not only are global patterns of insecurity, violence and conflict g

Law, War and the Penumbra of Uncertainty

Authors: Sam Selvadurai
Categories: Law
An exploration into how uncertainty and political and ethical biases affect international law governing the use of force.

Authors: James Gow
Categories: Law
This volume examines the legacy of the International Criminal Tribunal for the former Yugoslavia (ICTY), which was created under Chapter VII of the UN Charter a

The Responsibility to Protect

Authors: Aidan Hehir
Categories: Political Science
From Kosovo to Libya, humanitarian intervention is seldom out of the news. While the 'Responsibility to Protect' (R2P) has often been at the centre of these deb

The NATO Intervention in Libya