GOBLIN TALES OF LANCASHIRE - 26 illustrated tales about the goblins, fairies, elves, pixies, and ghosts of Lancashire 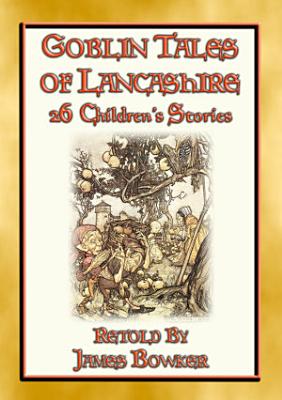 Herein are 26 illustrated tales about the goblins, fairies, elves, pixies, and ghosts of Lancashire for children. As you can see this book is not only about goblins but rather about the many beings which inhabit the lands of the Fairy Kingdom. Herein you will find stories like: * The White Dobbie * The Skriker, or Shrieker * The Unbidden Guest * The Fairy's Spade * The King Of The Fairies * The Captured Fairies * The Pillion Lady * The Fairy Funeral * The Silver Token * The Rescue Of Moonbeam; plus many, many more. But are goblins really as bad as they’ve been made out to be? Over the years, we have been told to think of Goblins as the most undesirable members of the Fairy kingdom. Well, if all the stories we read are only about the bad, or evil, Goblins, then that is likely to sway our opinion. It reminds me of the old adage, “The victorious in battle, get to write the world’s history.” In times well past, it is easy to understand how the unlettered peasant could people desolate areas with beings of another world; either the bleak fells, the deep and gloomy gorges, the wild cloughs, the desolate moorland wastes; or the salt marshes where the breeze-bent and mysterious-looking trees waved their spectral boughs in the wind; the dark pools fringed with reeds, amid which the 'Peg-o'-Lantron' flickered and danced, and over which came the hollow cry of the bittern and the child-like plaint of the plover; and the dreary glens, dark lakes, and long stretches of sand of the north and west. To them the forest was a place of solemn, Rembrandt-esque gloom, where Druids erst heard victims groan, the lonely fir-crowned pikes, and the mist-shrouded mountains, would seem fitting homes for the dread shapes whose spite ended itself in the misfortunes and misery of humanity. Pregnant with mystery to such a mind would be the huge fells, with their shifting 'neetcaps' of cloud, the towering bluffs, the swampy moors, and trackless morasses, across which the setting sun cast floods of blood-red light; and irresistible would be the influence of such scenery upon the imagination of lonely traveler riding, or walking, between villages and towns at night, with a feeling that he was surrounded by the supernatural. So sit back with a steamy beverage and be prepared to be entertained for many-an-hour. 10% of the net sale will be donated to charities by the publisher. ============== KEYWORDS/TAGS: Goblins of Lancashire, fairy tales, folklore, myths, legends, children’s stories, childrens stories, bygone era, fairydom, ethereal, fairy land, classic stories, children’s bedtime stories, happy place, happiness, elf, elves, pixie, piskie, supernatural, Skriker, Unbidden, Guest, Fairy's Spade, King Of The Fairies, Mother And Child, Spectral Cat, Captured Fairies, Pillion Lady, Fairy Funeral, Chivalrous Devil, Enchanted Fisherman, Sands Of Cocker, Silver Token, Headless Woman, Rescue Of Moonbeam, sun, moon, White Dobbie, Little Man's Gift, Satan's Supper, Earthenware Goose, Phantom Of The Fell, Allhallow's Night, Christmas-Eve Vigil, Crier Of Claife, Demon Of The Oak, Black Cock, Invisible Burden

GOBLIN TALES OF LANCASHIRE - 26 illustrated tales about the goblins, fairies, elves, pixies, and ghosts of Lancashire

Authors: Anon E. Mouse
Categories:
Herein are 26 illustrated tales about the goblins, fairies, elves, pixies, and ghosts of Lancashire for children. As you can see this book is not only about gob

THE MOON PRINCESS - A Fairy Tale

Authors: Edith Ogden Harrison
Categories: Fiction
The heavens were a stainless blue, and the Moon shone out of them arrayed in silvery garments. One by one the sky’s matchless jewels, the stars, peeped out, s

IT’S YOUR FAIRY TALE YOU KNOW - A Fairytale Adventure

Authors: Elizabeth Rhodes Jackson
Categories: Fiction
This book is for all little boys and girls who love fairies and pixies. Hewe we have a story about a boy named Wendell, who lives in Boston and likes fairy stor

The Story of Princess Nobody - A Children's Tale from Fairyland

Authors: Andrew Lang
Categories: Fiction
The Story of Princess Nobody is a tale from Fairy Land. A Charming story with equally charming illustrations which enhance the narrative of a much-loved classic

Authors: Birdsall Otis Edey
Categories: Fiction
This delightful collection of fairy tales contains six fanciful and whimsical stories for young ones to enjoy. They are: Six Giants and a Griffin, Gertrude's Vi

The FAIRIES and the CHRISTMAS CHILD

Authors: Lilian Gask
Categories: Fiction
The "Christmas Child" in this book isn't Jesus, but rather a boy born on Christmas Day, named "Chris". After his father forgets both Christmas and Chris’ birt

Authors: Louise Jamison
Categories: Fiction
Belinda was down by the pond watching the comings and goings of the many creatures and their peculiar habits. She had propped her doll, Belinda, in the crotch o

Authors: Lyman Frank Baum
Categories: Fiction
In book four of the adventures in Oz books, we find Dorothy Gale back home in Kansas. One day, she and her pet dog Toto meet the Shaggy Man who comes walking pa