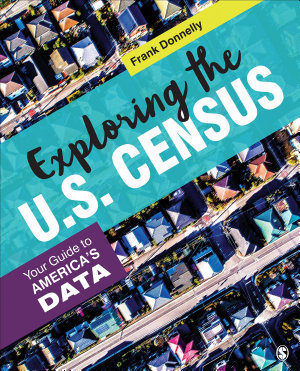 The United States census provides researchers, students, and the public with some of the richest and broadest information available about the American people. Exploring the U.S. Census by Frank Donnelly gives social science students and researchers alike the tools to understand, extract, process, and analyze data from the decennial census, the American Community Survey, and other data collected by the U.S. Census Bureau. More than just a data collection exercise performed every ten years, the census is a series of datasets updated on an ongoing basis. With all that data comes opportunities and challenges: opportunities to teach students the value of census data for studying communities and answering research questions, and the challenges of navigating and comprehending such a massive data source and transforming it into usable information that students and researchers can analyze with basic skills and software. Just as important as showing what the census can tell social researchers is showing how to ask good questions of census data. Exploring the U.S. Census provides a thorough background on the data collection methods, structures, and potential pitfalls of the census for unfamiliar researchers, collecting information previously available only in widely disparate sources into one handy guide. Hands-on, applied exercises at the end of the chapters help readers dive into the data. The first chapter of the book places the census into context, discussing the history and the role of the census in society as well as in the larger universe of government, open, and big data. The book then moves onto the essentials of the data structure including the variety of sources and searching mechanisms, geography from nation down to zip code, and the fundamental subject categories (social, economic, and geographic) that are used for summarizing data in all of the various datasets. The next section delves into the individual datasets, discussing the purpose and structure of each, with separate chapters devoted to the decennial census, ACS, Population Estimates Program, and business datasets. A final chapter for this section pulls everything together, with a focus on writing and presenting your research on the data. The final section covers advanced topics and applications including mapping, geographic information systems, creating new variables and measures from census data, historical census data, and microdata. Along the way, the author shows how best to analyze census data with open-source software and tools, such as QGIS geographic information system, LibreOffice® Calc, and the DB Browser for SQLite®. Readers can freely evaluate the data on their own computers, in keeping with the free and open data provided by the Census Bureau. By placing the census in the context of the open data movement, this text makes the history and practice of the census relevant so readers can understand what a crucial resource the United States census is for research and knowledge.

Authors: Frank Donnelly
Categories: Social Science
The United States census provides researchers, students, and the public with some of the richest and broadest information available about the American people. E

Authors: Raj Gadasalli
Categories: Business & Economics
Well researched and presented guide about the USA for world wide audience, especially for immigrants and perspective US immigrants to help them get a comprehens

Authors: Trae Stewart
Categories: Education
Service-learning is an exciting pedagogy and field of study, offering insight into how academic study and community engagement blend to create social change. In

Lewis and Clark and Exploring the Louisiana Purchase

Authors: Alicia Z. Klepeis
Categories: Juvenile Nonfiction
When President Thomas Jefferson bought the Louisiana Territory from cash-strapped France in 1803, he doubled the size of the United States without really knowin

Authors: National Academies of Sciences, Engineering, and Medicine
Categories: Medical
Evidence from the public health sector demonstrates that health care is only one of the determinants of health, which also include genes, behavior, social facto

Exploring Religion and the Sacred in a Media Age

Authors: Christopher Deacy
Categories: Religion
In recent years, there has been growing awareness across a range of academic disciplines of the value of exploring issues of religion and the sacred in relation

Authors: Christopher D. Lloyd
Categories: Technology & Engineering
Exploring Spatial Scale in Geography provides a conceptual and practical guide to issues of spatial scale in all areas of the physical and social sciences. Scal

Authors: Joseph F. Healey
Categories: Computers
This revised edition guides users of SPSS for Windows 95 and, like its predecessor, helps teach students how to `do' social science, by showing how compelling s

Discovering the American Past: A Look at the Evidence, Volume II: Since 1865

Authors: William Bruce Wheeler
Categories: History
This primary source reader in the popular DISCOVERING series contains a six-part pedagogical framework that guides students through the process of historical in