Politics, Culture And Identities In East Asia: Integration And Division 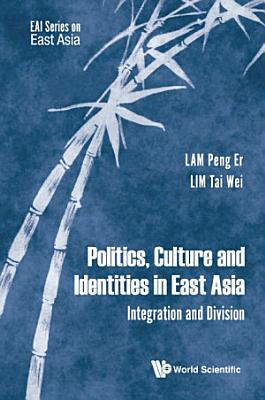 This edited book reflects the "yin-yang" of East Asia — the analogy of co-existing "hot and cold" trends in that region. To concentrate only on geopolitical competition and regional "hot spots" will exaggerate, if not misrepresent East Asia as a Hobbesian world. Nevertheless, geopolitical competition cannot be ignored because a failure of the balance of power and deterrence between China and the United States (and its allies) will destabilise the region. There are four "vectors" in the geopolitics of East Asia: China rising, the United States "rebalancing" to this region, Japan "normalising" as a nation-state and ASEAN emerging as a regional community. The interplay of these four "vectors" will set the trajectory of geopolitics in East Asia. Another focus of this volume is on the politics of identity. The distinctiveness, character and flavour of a group, real or imagined, can be "cool." "Cool" as in being charming and appealing transcends national boundaries. Plurality and diversity of identities and cultures in East Asia can be a celebration of life and humanity. However, xenophobic identities, often based on exclusive race, language, religion and hegemony, and its subsequent politicisation can rend a nation apart. Indeed, the affirmation of one's identity may be at the expense or denial of the identity of "the other." Similarly, the assertion and the intricacy of identity and nationalism in East Asia can also be problematic. However, a person or group can have multiple and different scales of identities. Indeed, identities can be fluid and situational. Contents: Introduction: Politics, Culture and Identity in East Asia: Integration and Division (The Editors)East Asia: Geopolitics and Economic Interdependency: Four Geopolitical Vectors in East Asia: China Rising, US Rebalancing, Japan "Normalising" and ASEAN Community Building (Lam Peng Er)Hot Spots in the Korean Peninsula and the East and South China Seas: Obstacles to an East Asian Community (Lam Peng Er)Economic Ties that Bind East Asia (Chiang Min-Hua)Politics of Identity: "Fishball Revolution" and Hong Kong's Identity (Lim Tai Wei)The Taiwanese Identity: Social Construction and Dynamic Changes in Cultural and Political Factors of Influence (Katherine Tseng Hui-Yi)ASEAN Identity: An Elusive Dream? (Lim Tai Wei)China, Japan and the Two Koreas: A Clash of Identities (Lam Peng Er)Regionalism, Popular Culture, Food, Media and Tourism: J-Pop and Manga in East Asia (Lim Tai Wei)Interlocking Cultural Relations Between South Korea and Its Neighbouring Countries (Lim Wen Xin)Chinese-Language Media in East Asia: Connectivity Amid Diversity (Shih Hui Min)China's Media Portrayal of ASEAN: From Antagonism to Euphoria to Circumspection (Lye Liang Fook)Intra-East Asian Tourism: An Exponential Rise Despite Bilateral Geopolitical Tensions (Liu Bojian)China: A New Global Education Hub (Wu Xiaoping) Readership: Policymakers, academics, professionals, undergraduate and graduate students interested in geopolitics and politics of identities of East Asia. Keywords: East Asia;Politics;International Relations;IndentitiesReview: Key Features: The diversity of scholars with individuals from Singapore, China, Malaysia and Taiwan lends different perspectives to the studying of East AsiaOther than the different nationalities of the scholars involved in this project, it is also a multidisciplinary venture with political scientists, economists, Japan experts, Sinologists and Southeast Asian experts involvedIt coinc

Politics, Culture And Identities In East Asia: Integration And Division

Authors: Lam Peng Er
Categories: Political Science
This edited book reflects the "yin-yang" of East Asia — the analogy of co-existing "hot and cold" trends in that region. To concentrate only on geopolitical c

Towards Monetary and Financial Integration in East Asia

Authors: Koichi Hamada
Categories: Business & Economics
Towards Monetary and Financial Integration in East Asia is an important book. East Asia, led by China, has been and will continue to be the largest, most rapidl

Authors: Yanrui Wu
Categories: Business & Economics
East Asian nations through the dialogue between ASEAN and its partners have been promoting energy market integration (EMI) for a decade. The formation of the Ea

Authors: Yeongseop Rhee
Categories: Business & Economics
Throughout North Korea’s history, it has regarded external relations with suspicion and as a potential threat to its regime. With North Korea working towards

Authors: Anna G Tevini
Categories: Law
The accession of the People's Republic of China to the World Trade Organization (WTO) in 2001 significantly transformed the global economy both de facto and de

Authors: Idir Bouarar
Categories: Science
This book, written by an international group of experts from China, Europe and the USA, presents a broad and comprehensive analysis of the chemical and meteorol