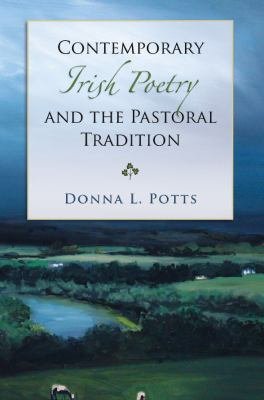 In Contemporary Irish Poetry and the Pastoral Tradition, Donna L. Potts closely examines the pastoral genre in the work of six Irish poets writing today. Through the exploration of the poets and their works, she reveals the wide range of purposes that pastoral has served in both Northern Ireland and the Republic: a postcolonial critique of British imperialism; a response to modernity, industrialization, and globalization; a way of uncovering political and social repercussions of gendered representations of Ireland; and, more recently, a means for conveying environmentalism’s more complex understanding of the value of nature. Potts traces the pastoral back to its origins in the work of Theocritus of Syracuse in the third century and plots its evolution due to cultural changes. While all pastoral poems share certain generic traits, Potts makes clear that pastorals are shaped by social and historical contexts, and Irish pastorals in particular were influenced by Ireland’s unique relationship with the land, language, and industrialization due to England’s colonization. For her discussion, Potts has chosen six poets who have written significant collections of pastoral poetry and whose work is in dialogue with both the pastoral tradition and other contemporary pastoral poets. Three poets are men—John Montague, Seamus Heaney, Michael Longley—while three are women—Eavan Boland, Medbh McGuckian, Nuala Ní Dhomhnaill. Five are English-language authors, while the sixth—Ní Dhomhnaill—writes in Irish. Additionally, some of the poets hail from the Republic, while others originate from Northern Ireland. Potts contends that while both Irish Republic and Northern Irish poets respond to a shared history of British colonization in their pastorals, the 1921 partition of the country caused the pastoral tradition to evolve differently on either side of the border, primarily because of the North’s more rapid industrialization; its more heavily Protestant population, whose response to environmentalism was somewhat different than that of the Republic’s predominantly Catholic population; as well the greater impact of the world wars and the Irish Troubles. In an important distinction from other studies of Irish poetry, Potts moves beyond the influence of history and politics on contemporary Irish pastoral poetry to consider the relatively recent influence of ecology. Contemporary Irish poets often rely on the motif of the pastoral retreat to highlight various environmental threats to those retreats—whether they be high-rises, motorways, global warming, or acid rain. Potts concludes by speculating on the future of pastoral in contemporary Irish poetry through her examination of more recent poets—including Moya Cannon and Paula Meehan—as well as other genres such as film, drama, and fiction.

The Poetics of Migration in Contemporary Irish Poetry

Authors: Ailbhe McDaid
Categories: Literary Criticism
This book offers fresh critical interpretation of two of the central tenets of Irish culture – migration and memory. From its starting point with the ‘New I

Authors: Donna L. Potts
Categories: Literary Criticism
This book examines how the Irish environmental movement, which began gaining momentum in the 1970s, has influenced and been addressed by contemporary Irish writ

Authors: Andrew J. Auge
Categories: Literary Criticism
Contemporary Irish Poetry and the Climate Crisis addresses what is arguably the most crucial issue of human history through the lens of late-twentieth and early

Authors: Matthew Campbell
Categories: Literary Criticism
In the last fifty years Irish poets have produced some of the most exciting poetry in contemporary literature, writing about love and sexuality, violence and hi

Authors: Donna L. Potts
Categories: Poetry
The poet and playwright Francis Harvey, born in Enniskillen, County Fermanagh, Northern Ireland, has spent most of his life in County Donegal, where he has publ

Ecocriticism, Ecology, and the Cultures of Antiquity

Authors: Christopher Schliephake
Categories: History
By focusing on ancient culture and its reception, this book fills integrates antiquity into our current ecocritical theory and practice to fill in a gap in our

Authors: Jody Allen Randolph
Categories: Literary Criticism
As a comprehensive introduction to Eavan Boland’s work, this book provides an essential guide to the work of one of the most important and challenging voices