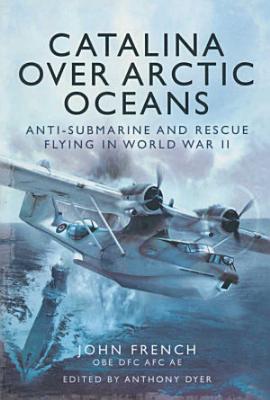 John French first took up flying in 1937 with the University of London Air Squadron and in 1938 joined the Royal Air Force Volunteer Reserve. His early war years were spent instructing newly recruited RAF pilots on Airspeed Oxfords and Avro Ansons. When the end of this posting came through he was designated to 210 Squadron at Sullom Voe in the Shetlands to fly the Catalina flying boat. In November 1942 the squadron was ordered south to join 202 Squadron at Gibraltar. Here they flew sorties in support of the North African landings  Operation Torch. These were lengthy flights out into the Atlantic approaches to Gibraltar or Eastwards into the Mediterranean. He flew fifteen sorties in this short period before returning to Pembroke Dock. He was then instructed to report to Felixstowe to collect Catalina IB FP 222 and to ferry it up to his new base Sullom Voe. From this northern base the flying boats flew thirty hour patrols out into the Northern Atlantic searching for enemy ships and U-boats. On 8 September he was ordered to execute an extended search of the Norwegian coast where it was thought that the Tirpitz and Scharnhorst were seeking shelter. Having unsuccessfully searched the entire coastline at low-level they finally touched down on the Kola Inlet after a flight of over twenty-two hours. As February 1944 came towards its end he was detailed to cover a Russian convoy, JW57, far up to the north of the Arctic Circle. Shortly before his ETA with the convoy they got a radar return. They dropped down below the cloud to find a rough angry sea and spotted the wake of a ship. However this was not a ship but a surfaced U-boat. As they flew into attack they met a hail of 37mm and machine-gun fire John dropped to attack level and came in from the stern dropping two depth charges. Thus came the demise of U-601. On 18 July 1944 a Liberator of 86 Squadron was set on fire during an attack on a U-boat and was forced to ditch some 100 miles west of the Loften Islands. Eight members of the crew took to their dinghies. A Catalina was despatched on a search and rescue mission the following day but failed to find the victims. However on 20 July they were resighted. A volunteer crew was hastily formed and took off at 0130 on the 21st. Some excellent navigation brought the survivors into view at ETA. John decided to attempt a sea landing to effect the rescue. He came in low, into wind and across the swell at 65 knots. His crew soon had the stranded airman aboard, somewhat bedraggled after their sixty-two hour ordeal. They landed back at Sullom at 1410. After the war John stayed in the RAF and spent much of his time behind the Iron Curtain.

Battle over the Atlantic

Authors: John Quaife
Categories: History
At the outbreak of World War II, somewhat by accident — and just as the first shots of the war were fired — young Australian airmen from the Royal Australia

Authors: Deborah Lake
Categories: History
Britain's first flying machine was trailed in Perthshire in 1907 and ever since - whether at war or in peacetime - Scotland has been in the frontline of British

Proceedings of the ... annual meeting of the Board of Supervising Inspectors of Steam Vessels

The Sailor's Magazine, and Naval Journal

Authors: Bernard Bourdon
Categories: Science
Volume 52 of Reviews in Mineralogy and Geochemistry updates our knowledge of U-series geochemistry, offer an opportunity for non-specialists to understand its b

The Sailors' Magazine and Seamen's Friend

Short Hops Across the Atlantic

Authors: Colin Cox
Categories: Air travel
From Aerial Surveying over London & the UK in a noisy twin engine plane to flying small single and twin engine planes from the warmth of the Caribbean, up the E

A Directory for the Navigation of the Pacific Ocean, with Descriptions of Its Coasts, Islands, Etc.

Authors: A. G. Findlay
Categories: History
First published in 1851, this two-volume work is a comprehensive nautical directory of the coastlines and islands of the Pacific.