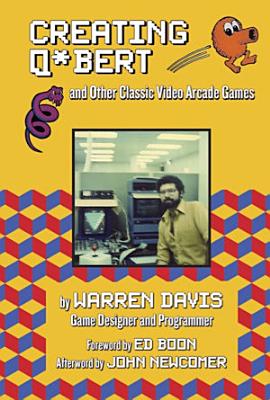 Creating Q*bert and Other Classic Video Arcade Games takes you inside the video arcade game industry during the classic decades of the 1980s and 1990s. Warren Davis, the creator of the groundbreaking Q*bert, worked as a member of the creative teams who developed some of the most popular video games of all time, including Joust 2, Mortal Kombat, NBA Jam, and Revolution X. In a witty and entertaining narrative, Davis shares insightful stories that offer a behind-the-scenes look at what it was like to work as a designer and programmer at the most influential and dominant video arcade game manufacturers of the era, including Gottlieb, Williams/Bally/Midway, and Premiere. Likewise, the talented artists, designers, creators, and programmers Davis has collaborated with over the years reads like a who’s who of video gaming history: Eugene Jarvis, Tim Skelly, Ed Boon, Jeff Lee, Dave Thiel, John Newcomer, George Petro, Jack Haegar, and Dennis Nordman, among many others. The impact Davis has had on the video arcade game industry is deep and varied. At Williams, Davis created and maintained the revolutionary digitizing system that allowed actors and other photo-realistic imagery to be utilized in such games as Mortal Kombat, T2, and NBA Jam. When Davis worked on the fabled Us vs. Them, it was the first time a video game integrated a live action story with arcade-style graphics. On the one-of-a-kind Exterminator, Davis developed a brand new video game hardware system, and created a unique joystick that sensed both omni-directional movement and rotation, a first at that time. For Revolution X, he created a display system that simulated a pseudo-3D environment on 2D hardware, as well as a tool for artists that facilitated the building of virtual worlds and the seamless integration of the artist’s work into game code. Whether you’re looking for insights into the Golden Age of Arcades, would like to learn how Davis first discovered his design and programming skills as a teenager working with a 1960s computer called a Monrobot XI, or want to get the inside scoop on what it was like to film the Rock and Roll Hall of Fame band Aerosmith for Revolution X, Davis’s memoir provides a backstage tour of the arcade and video game industry during its most definitive and influential period.

Authors: Warren Davis
Categories: Games & Activities
Creating Q*bert and Other Classic Video Arcade Games takes you inside the video arcade game industry during the classic decades of the 1980s and 1990s. Warren D

Authors: Susan Farrell
Categories:
Examines the life and works of Kurt Vonnegut including detailed synopses of a variety of his works, character descriptions, important places Vonnegut lived and

At Least You're Not Bert

Authors: G.H. Marielle
Categories: Fiction
Bert is a larger than life protagonist who lives in a universe that is out to get him. He is a loser at love and a failure in life, who decides to garner good l

The Rubber Band/The Red Box 2-in-1

Authors: Rex Stout
Categories: Fiction
A grand master of the form, Rex Stout is one of America’s greatest mystery writers, and his literary creation Nero Wolfe is one of fiction’s greatest detect

Topicalization and Stress Clash Avoidance in the History of English

Authors: Augustin Speyer
Categories: Language Arts & Disciplines
"The book is concerned with the interaction of syntax, information structure and prosody in the history of English, demonstrating this with a case study of obje

Teaching Music to Students with Autism

Authors: Alice M. Hammel
Categories: Education
This book is the first resource to provide a comprehensive study of the music education of students with autism. Topics include: diagnosis, advocacy, and a coll

Authors: Donald J. Stubblebine
Categories: Music
This work, a companion to the author's Broadway Sheet Music: A Comprehensive Listing of Published Music from Broadway and Other Stage Shows, 1918 through 1993 (

Authors: Richard Grudens
Categories: Music
This book looks at the anatomy of a big band radio station with the broadcasters and the songwriters. Chapters cover the early dance bands of Paul Whiteman, Leo