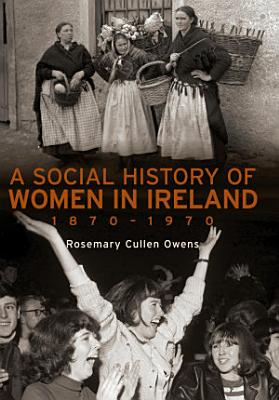 A Social History of Women in Ireland is an important and overdue book that explores the role and status of women in Ireland from 1870 until 1970, looking at politics, sociology, marriage patterns, religion, education and work among other topics. It provides a vital missing piece in the jigsaw of modern Irish history. Using a combination of primary research and published works, A Social History of Women in Ireland explores the role and status of women in Ireland. It examines lifestyle options available to women during this period as well as providing an overview of the forces working for change within Irish society. In bringing together a wide-ranging portfolio of material, A Social History of Women in Ireland 1870–1970 fills an important gap in the literature of the period by focusing on the experiences of Irish women, a group so often overlooked in histories of revolutionary men and prominent politicians. Crucial to a determination of the status of women throughout this period is an examination of the choices available regarding work, marriage and emigration. Rosemary Cullen Owens stresses at all times the importance of class and land ownership as key determinants for women’s lives. A decrease in home industries allied to increasing mechanisation on the farm resulted in a contraction of labour opportunities for rural women. With the establishment of an independent farming class, the distinguishing criteria for status in rural Ireland became ownership of land, in which single-minded patriarchal figures dominated. In this context, the position of women declined, and a society evolved with a high pattern of late-age marriages, large numbers of unwed sons and daughters, and an accepted pattern of emigration. In the cities and towns, the condition of lower-working-class women was especially distressing for most of the period, with particular problems regarding housing, health and sanitation. Through the work of campaigning activists, equal educational and political rights were eventually attained. From the early 1900s there was some expansion in female employment in shops, offices and industry, but domestic service remained a high source of employment. For middle-class women, employment opportunities were limited and usually disappeared on marriage. The civil service — a major employer in an economy that was generally un-dynamic and stagnant — operated a bar on married women for much of the period. Rosemary Cullen Owens not merely traces these injustices but also the campaigns fought to right them. She locates these struggles in the wider social context in which they took place. This important book restores balance to the narrative of modern Irish history, changing the focus from key male political figures to society at large by unveiling the often forgotten story of the country’s women over a tumultuous century of change. In doing so, Rosemary Cullen Owens enriches our understanding of Irish history from 1870 to 1970. A Social History of Women in Ireland: Table of Contents Introduction Part 1. Irishwomen in the Nineteenth Century ‘A progressively widening set of objectives’—The Early Women’s Movement Developments in Female Education Faith and Philanthropy—Women and Religion Part 2. A New Century—Action and Reaction Radical Suffrage Campaign Feminism and Nationalism Pacifism, Militarism and Republicanism Part 3. Marriage, Motherhood and Work The Social and Economic Role of Women in Post-Famine Ireland Trade Unions and Irish Women Women and Work Part 4. Women in the New Irish State The Quest for Equal Citizenship 1922–1938 The Politicisation of Women Mid-Twentieth Century Epilogue: A Woman’s World?

Authors: Rosemary Cullen Owens
Categories: History
A Social History of Women in Ireland is an important and overdue book that explores the role and status of women in Ireland from 1870 until 1970, looking at pol

Poetry by Women in Ireland

Authors: Lucy Collins
Categories: Poetry
Uncovering the hidden history of poetry written by women in Ireland from 1870 to 1970, this anthology includes more than 180 poems by fifteen women with diverse

Women, Crime and Punishment in Ireland

Authors: Elaine Farrell
Categories: History
Focusing on women's relationships, decisions and agency, this is the first study of women's experiences in a nineteenth-century Irish prison for serious offende

Authors: Fergus Campbell
Categories: History
This collection of essays explores the nature and dynamics of Ireland's land questions during the nineteenth and twentieth centuries, and also the ways in which

Irish Women and the Vote

Authors: Louise Ryan
Categories: History
This landmark book, reissued with a new foreword to mark the centenary of Irish women being granted the right to vote, is the first comprehensive analysis of th

Have Women Made a Difference?

Authors: Judith Harford
Categories: Education
Tracing the evolution of women's role in university education from the 19th century to the present day, this book captures the complexity of women's position wi

Irish women and the creation of modern Catholicism, 1850–1950

Authors: Cara Delay
Categories: Religion
This is the first book-length study to investigate the place of lay Catholic women in modern Irish history. It analyses the intersections of gender, class and r

The Princeton History of Modern Ireland

Authors: Richard Bourke
Categories: History
This book brings together some of today's most exciting scholars of Irish history to chart the pivotal events in the history of modern Ireland while providing f

Women and Citizenship in Britain and Ireland in the 20th Century

Authors: Esther Breitenbach
Categories: History
The continuing under-representation of women in political and public life remains a matter of concern across a wide range of countries, including the UK and Ire